After visiting the suggested Site Nitaipadakamala
from the Links section, a question arose in my mind...

Sri Nityananda Rama was deriving so much pleasure out of that trancedental passtimes as Krishna-Vishnu-Lila(Nitai enacts Krsna Lila) !
My question is : in which moment He fully merged into the mood of Nityananda Prabhu, the Patitapavana of Kali-Yuga ? Was that when He met Sri Caitanya Mahaprabhu , or ?


My question is : in which moment He fully merged into the mood of Nityananda Prabhu, the Patitapavana of Kali-Yuga ?  Was that when He met Sri Caitanya Mahaprabhu , or ?

I think this could be parte of the answer :CB Adi-lila Ch9

Any more to add to this creamy nectar ?

My humble question is : Who was that Sweet Personality, named Madhavendra Puri, in Sri Krishna's Nitya-lila... ?

My humble  question is : Who was that Sweet Personality, named Madhavendra Puri, in Sri Krishna's Nitya-lila... ?


After regaining external consciousness, both of them began to embrace one another, crying tears of ecstasy. The two great teachers rolled on the ground in the ecstasy of divine love, and, transformed by their jubilation, shouted words of joy with voices of thunder. Tears of love flowed like rivers from the eyes of those two great masters. And wet with their tears, the Earth felt blessed. There was no end to the display of transcendental ecstasy shown by those two great souls whose bodies shivered as tears flowed from their eyes and their hair stood on end, for Caitanya Mahaprabhu himself danced within their hearts.


Isvara Puri, Brahmananda Puri, and all the other disciples of Madhavendra Puri, felt irresitably attracted to Nityananda Prabhu. Although they had met so many renounced saints, they could detect no trace of love for Krsna in any of them. And by meeting those unfortunate and wicked souls, they gaines nothing but grief. And being aggrieved, they sought refuge in the forests. But now they were relieved of all their sorrows upon beholding in one another the manifestation of love for Krsna.


Madhavendra Puri went off to visit the Sarayu river. Being completely absorbed in Krsna, neither of them could remember anything of their own physical bodies. Completely forgetful of their own selves, they passed their days in the agony of separation from each other and so their life was preserved. For if any external consciousness had remained, it would have been impossible for them to survive the agony of separation. Whoever hears this account of Nityananda Prabhu and Madhavendra Puri with faith and devotion, obtains the treasure of love for Krsna. 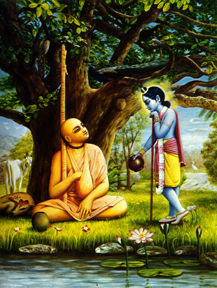 What really astonishes me in this pastime, is how much pleasure a Kalpa-vrksa can supply to the Lord; how much love and devotion Madhavendra Puri could exhibit, that even great personalities like Advaita Acarya took initiation from him. Now, bewilder is my mind, it can't understand the fortunate position of such devotees like Yasoda Ma, Purnamasiji, what to speak about the Gopas and Gopis that spend so much time with Nadanandana Sri Krishna in the woods of Vrindavana. Oh my Lord, how can one image the exclusive positions of Lalita, Champakalata, Tungavidya and what about Rupa Manjari, Rati Manjari...? Oh my Lord, how then one can describe the unique position of Vrishbhanu-suta Srimat Radhika (Hari priye!), the life and soul of Rasikaraja Vrajendrananda Sri Krishna? How much pleasure all these great devotees can give to Sri Krishna...?
As Kavi Karnapura says in his Goura Ganodesa Dipika; one may beg for their mercy :

1. Dark-complexioned Lord Krsna, whose form is eternal, blissful, and full of knowledge, formerly danced with the golden-complexioned gopis in the land of Vrndavana. By intently embracing them He attained a golden complexion like theirs. In this golden form He has now appeared in the town of Navadvipa.


Praying to His dearmost Srimat Radhika:


12 When will Vrndavana's queen Radha, Her eyes restless with love and Her limbs like waves in the flooding ocean of nectar, place Her merciful glance upon me?

13 O queen of Vrndavana, I take shelter of your lotus feet, which are flooded with nectar, which are cool and pleasing, and which, placed over Lord Krsna's heart, extinguish the blazing fire of desire that torments Him.

14 I pray that my heart may find its happiness in Radha's pastime forest, where the vines bear flowers picked by Radha's own hands, where many charming places bear Radha's footprints, and where the birds passionately sing of Radha's glories.

15 I will say, "You should go there and bathe in the dark nectar." Smiling, Radha will joke, "O friend, wait until night. Then the dark nectar will come here." When will I pick this glorious flower on the kadamba tree of Radha's sweet pastimes?


Desiring for the dust of the lotus feet of devotees like kalpa-vrksas,