Gaudiya Discussions Archive » MISCELLANEOUS
Copy-pastes that don't fit well into any of the other categories.

The Holy Shroud of Turin - Connections among Spiritual Traditions 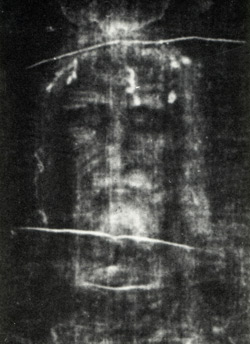 The Holy Shroud of Turin: Did Jesus wear a Vaisnava tilaka?

Scientist Paul Vignon, an official examiner of the Shroud in 1930', noticed in the Byzantine painting, a mosaic of the Holy Shroud of Turin, a "V" mark down the center of the forehead.

"Researcher Paul Vignon, noticed "on the forehead between the eyebrows of this work a starkly geometrical |_| shape....When he turned to the equivalent point the Shroud face, there was the same feature, equally as geometric, and equally as unnatural because it appeared to have noting to do with the image itself... (Ian Wilson, The Shroud of Turin - The Burial Cloth of Jesus Christ?, 1978)

Jesus's escape
from death on the cross
and journey to India

This is an English version of an Urdu treatise written by the Holy Founder of the Ahmadiyya Movement in Islam, Hazrat Mirza Ghulam Ahmad (1835-1908). The theme is the escape of Jesus from death on the cross, and his journey to India in search of the lost tribes of Israel. Christian as well as Muslim scriptures, and old medical and historical books including ancient Buddhist records, provide evidence about this journey. Jesus is shown to have reached Afghanistan, and to have met the Jews who had settled there after deliverance from the bondage of Nebuchadnezzar. From Afghanistan Jesus went on to Kashmir, where other Israelite tribes had settled. There he made his home, and there in time he died; his tomb has been found in Srinagar.

Holger Kersten: "It is simply of vital importance to find again the path to the sources, to the eternal and central truths of Christ's message, which has been shaken almost beyond recognition by the profane ambitions of more or less secular institutions arrogating to themselves a religious authority. This is an attempt to open a way to a new future, firmly founded in the true spiritual and religious sources of the past".


Thus begins Holger Kersten's book "Jesus Lived in India". This German book is a thorough, methodical and authoritative examination of the evidence of Christ's life beyond the Middle East before the Crucifixion and in India and elsewhere after it.

This article is a summary of Kersten's exhaustive research into Christ's travels after the Crucifixion, his arrival in India with the Mother Mary and finally his death and entombment in Kashmir. Kersten notes the many parallels of Christ's teachings with other religious and cultural traditions and suggests that at least some of these figures may have been one and the same personality. It is not possible, Kersten asserts, to disprove that Christ went to India. The current information documenting Christ's life is restricted to the gospels and the work of Church theologians. One can hardly trust these sources to be objective considering their obvious interest in maintaining the authority of their Church and its grip on the masses.
Jesus Lived in India

Migration to the East

Ahmadi Muslims believe that the physical ascension of Jesus to Heaven is a later interpolation. The term "heaven" is used for spiritual bliss which the righteous enjoy after a mortal life.
Jesus was sent to the lost sheep of the house of Israel (Matt. 15:24). Out of twelve tribes of Israel, only two were in the region where Jesus preached. The other ten tribes, as a result of exile, were domiciled in the eastern countries, especially in Afghanistan and Kashmir. It was imperative for Jesus to migrate eastwards to complete his mission.

There is overwhelming evidence that the people of Afghanistan, Kashmir and neighbouring regions are of Israelite ancestry. Their physical features, languages, folklore, customs, and festivals attest to their Israelite heritage. Evidence also comes from the names they give to their villages, their monuments, and ancient historical works and inscriptions.
Islamic Beliefs