"When we see any image of goddesses we bow our heads with respect and here they were displayed in such an insulting way."
- Amitabh Soni, human resources executive
London's Harrods department store has apologised to its customers for selling controversial underwear bearing images of Hindu goddesses.
Harrods removed the underwear and swimwear range from sale after a protest by a Hindu pressure group.

The store said: "We apologise to those customers who have been offended or distressed by the situation."

Hindu Human Rights, a group which says it "safeguards the religion and its followers", lodged a complaint with the store on Monday seeking the removal of the range.

"When we heard that Harrods was selling such garments, we registered our protest. We cannot bear the insult to our religion," said spokesperson Sheila Church.

"Our goddesses are revered by millions of Hindus. How can somebody use them for such purposes? We sent Harrods a large number of signatures protesting against it."

The summer range has been on sale for some time but the controversy started on Sunday when an Indian human resources executive, Amitabh Soni, saw mannequins bearing the brightly coloured bikinis.

"I was shocked to see them," he told BBC Hindi Online.

"When we see any image of goddesses we bow our heads with respect and here they were displayed in such an insulting way", Mr Soni said.

He is now happy at the outcome, but said the store had not listened when he asked it to remove the garments.

"So I got in touch with Hindu Human Rights," he said.

Controversies relating to Hindu icons are not new.

Hindu Human Rights is also protesting against the new film by Ismail Merchant, Shakti, in which rock singer Tina Turner plays the role of goddess Kali.

Last year another department store had to apologise for selling toilet seats with images of a Hindu deity.

A number of designers have been attracted by the richness of Hindu iconography and the fad for exotic ethnic patterns. 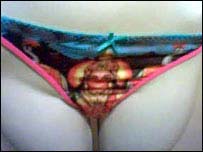