Gaudiya Discussions Archive » PEARLS OF WISDOM
Verses, prayers and quotes of choice. If you come across something you find inspiring, please post it here. You can also start threads on a particular theme and regularly post in something related.

Loves torments are understood as the natural form of religious discipline. [There] is a whole field of poetry in Braj dedicated to making this point, to demonstrating how the gopis, separated from Krishna, endure mortifications by virtue of the sundering of their love that are deeper by far than any austerities or yoga can concoct. They manifest all the marks of yogic discipline naturally. A yogi must learn through years of practice the art of keeping awake for long periods of time; for the woman of Braj separated from Krishna, sleep is out of the question. The one pointed concentration for which yogis strive is also all too easily theirs: they can think of nothing but their lost love. [As] for the internal heat (tapas) that yogis learn to fan and channel so as to make all this possible, it is theirs without even asking. Love is an unquenchable forest fire, as they often say: robbed from its object it scorches everything in sight. (J.S. Hawley 1981:234)

Averse from eating, turned away from every object of the senses,
and this too, that your eye is fixed in trance;
again, your mind is single-pointed,
and then this silence, and the fact
that all the world to you seems empty.
Tell me, gentle friend, are you a yogini
or a viyogini?

You viyoginis have achieved a state
to which even yogis cannot aspire.
For yogis, the Supreme Purusha is the object of meditation;
you, however, have become the objects of his meditation!
How rare can that be?


(Padyavali 347, anonymous)That last bit has a bit of word play, in the sense that the concept of "purusha" to the yogi, and to a gopi, are completely different.
And of course, let us not forget (BhP 10.82.40)--

[The gopis] said: Oh lotus-navelled Krishna!
Your lotus-feet are the object of meditation
held in the hearts of the masters of yoga,
whose understanding is unfathomable;
May those feet appear always in our minds,
and they alone are the boost that raises
those like us who have fallen into the well of samsara,
and are so deeply attached to our homes.

According to Jiva's paraphrasing, the underlying implication or suggestion of the gopis speech is as follows:

It is all very well for you to tell us to remember your feet when we want to see you and be with you. The yogins may well be able to meditate on them because they are so unfathomably deep that they are emotionally unaffected. We on the other hand fall into a faint the minute that we begin to remember you. If we could just touch your feet that are soft like the lotus, the pains of separation would be relieved, but this will not happen if we merely remember them.

You may think that we could be relieved from our separation in the way the yogins are raised up from the well of material life; but a well is one thing -- we have fallen into an ocean of separation, which is another. If you say to us, well come to Dvaraka, our answer is that we are attached to our homes in Vrindavan. That is where you also belong, with us in Vraja. Only your return there will save us.

1. He is like 'gAruDa-maNi' which removes the dangers arising from poisonous snakes.

2. He is recognized as the supremely brilliant gem which protects the three universes - 'trai-lOkya-rakshA-maNi'.

3. He is celebrated as 'gOpI-lOcana-cAtaka-ambuda-maNi' i.e. He is the gem in the form of rainy clouds for the cAtaka birds which represent the eyes of the cowherdesses of Vrindavana.

4. He is the living proof (mudra) of combined essence of all the beauty in the three worlds, shining as an invaluable gem - 'saundarya-mudrA-maNi'.

5. This beautiful gem of kRshNa is visualized as resting His head between the breasts of SrI rukmiNI dEvI, the Divine Consort of Lord Krishna. He is the blue sapphire that adorns the heavy bosom of the 'kAntA-maNi', His Beloved jewel, SrI rukmiNI -

6. He is appreciated as the crown jewel of gOpas, cowherds of Vrindavana - 'gopAla-cUDA-maNi'.

7. He being the Supreme Lord is worshipped as the crown jewel of all devas, the heavenly gods - 'dEva-SikhA-maNi'.

slightly modified from the original source:

Averse from eating, turned away from every object of the senses,
and this too, that your eye is fixed in trance;
again, your mind is single-pointed,
and then this silence, and the fact
that all the world to you seems empty.
Tell me, gentle friend, are you a yogini
or a viyogini?

(Padyavali 238)
When asked by Her Sakhi as quoted above,
virahini Radharani replied: 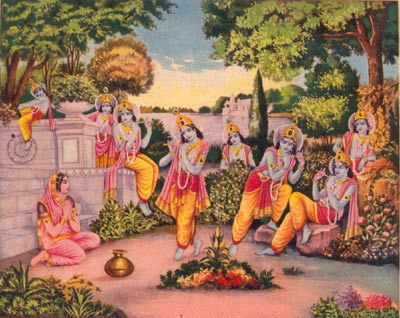 What Radhaji said in 'Padyavali. 239', is rephrased in Hindi:

For an elevated pure devotee separation from her Divine Beloved
is considered as the best blessing, not union,
because there is greater bliss in separation as the lover
experiences her Beloved in everything and everywhere,
the three worlds seem completely pervaded by her Beloved.

In the Gambhira, Sriman Mahaprabhu, accepting Srimatis mood, tasted this intoxicating nectar, and sang as follows:

O Hero! Listen to the pastimes of Your lips! They intoxicate the womens minds and attract their tongues, turning everything around.

It is still understandable that Your shameless lips will attract the women, but it is embarrassing to say that they also attract the men and even your flute itself, which is also male. It likes to drink the nectar of Your lips and thus it forgets all other flavors.

What to speak of conscious beings, even unconscious beings are made concious by Your lips, that are like great magicians! Your flute is a dry piece of wood, but Your lips give it a mind and senses and constantly makes it drink its own nectar.

The nectar of Krnas combined with the vibration of His flute, attracts all the people of the three worlds. But when we remain calm out of fear of moral principles, then the flute mocks us!

He makes our girdles slacken in front of our superiors and makes us give up all shame and morality. It is as if he takes us by the hair and makes us Your maidservants. When the people hear this, they laugh. In this way the nectar of Your lips makes women dance.

Even if I got the lifespan of Brahma I could not repay you for Your pure loving service to Me! Your connection with Me is spotlessly pure and you are completely fixed in Me! Even in dreams you dont touch anyone else but Me! The cowherders were able to touch your love-filled bories and your minds are completely pure; your passionate eager for Me is indeed incomparable! You have given up all moral principles to please Me, and thereby you have forsaken your chances for happiness in this life and in the next! I have lovers elsewhere also, therefore My love for you is incomplete, but your love for Me is complete. I am forever unable to repay My debt to you girls and thus I will remain a debtor of love to you. 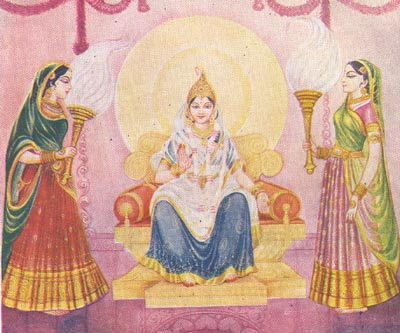 In this verse, the Rasik Saint glorifes Radharani as our priceless Gem!

Sri Radhika is the rarest Cintamani Jewel Who divinizes and bestows Divine Love upon the surrendered souls,
like the philosopher's stone which transforms ordinary metal into valuable gold.

She is appreciated as the beautiful crown Jewel among the charming cultured ladies of Vrindavan, the exalted Gopis.

As an exquisite Jewel ornament, She brings honor and fame to King Vrsabhanu's dynasty.

She alone is celebrated as the best pacifying Gem for Her dark Beloved, Lord Krishna's Divine passion.

She is recognized as the exclusive Jewel decoration of the secluded groves of the enchanted forest.

The Divine Consort Sri Radha is the everlasting Jewel treasured in the precious jewellery chest of Her devotees' hearts. "Remember Gaura-Gadadhara during the time of Their pastimes, Meditate on Gaura-Gadadhar, the Divine couple, the par-excellence of beauty. Hear beautiful discussions on the topics of Gaura-Gadadhara, and worship them in the forest grove of Godruma, bathed in the light of the moon."
[Srila Bhaktivinoda Thakura]