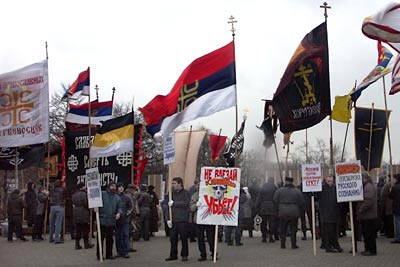 Over a thousand people gathered in central Moscows Pushkin Square Sunday to protest the building of a Hare Krishna temple on the northwestern outskirts of the city. Most of the demonstrators represented various Russian Orthodox Christian organizations.

The demonstration was organized jointly by the Russian Orthodox Radonezh society, and by the Council of Russian Orthodox Youth Organizations. Various Christian groups have been protesting the Hare Krishna temple ever since Moscow Mayor Yuri Luzhkov gave the Krishna society a license to build a center using its own funds this January. The groups say that the Hare Krishna faith is not traditionally Russian.

Moreover, organizers chose March 21 because on this day four years ago an Orthodox celibate priest was killed by a man who claimed to be a Krishna follower, organizers told the Interfax news agency.

Kirill Frolov, a spokesman for the Orthodox Civic Council, told MosNews that the authorities made a decision [of allowing the Krishna society to build a temple] without consulting first with the Moscow community.

Frolov called the Hare Krishna movement a totalitarian faith. He admitted that the Krishna society is registered by the authorities and is therefore entitled to build a temple if it wishes to, but added that the temple doesnt fit in Moscow neither architecturally, nor religiously.

Khodynskoe Field, where the temple has been allotted space, is on the outskirts of the city, close to the airport, and surrounded by modern high-rise apartment blocks.

Apart from the rally, the organizers set up a desk where they gathered signatures for a petition against the building of the temple. As many as 20,000 signatures have been gathered, Elena Baranova, an organizer, told Ekho Moskvy radio. Her religious group plans to hand over the petition to the Northern District prefecture, and to the mayors office, in an attempt to halt the building plans.

The prefecture has said, meanwhile, that it will consider all the signatures. Right now, the prefecture only has an order from the mayor dated January 20 about granting the Krishna society a plot of land for immediate exploitation, Marina Ochneva, a spokeswoman from Moscows Northern District prefecture told MosNews. The society will finance whatever it plans to build there, and its projects will need to be approved.

She added that people have a right to speak out against the building of a Hare Krishna temple, and that the petition would be examined and considered.

Meanwhile, city authorities have said that the rally itself was a violation.

Police told Gazeta.ru that the Moscow authorities gave permission for a gathering of no more than 500 people. When over 800 protesters showed up, a violation was registered. Authorities, however, say they are unsure of whom to hold responsible, since the rally was organized jointly. One of the demonstrators, citing police reports, told MosNews that over five thousand people came to the rally.